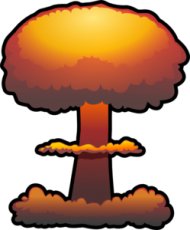 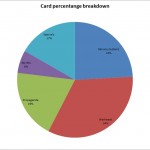 Another guest post here from Steven who has taken some time to expand upon it to cover the new material.
This guide is copyright 2014 Steven Ward. Nuclear War is a trademark of, and produced by Flying Buffalo Inc.

Nuclear War is a non-collectable card game that has been around since 1965; Doug Malewicki created it and it was first released in 1965. In 1983 Flying Buffalo released Nuclear Escalation, a standalone set that introduced more weapons of mass destruction. In 1992 Nuclear Proliferation followed, another standalone game with more weapons and players controlled countries with special abilities.   During the collectable card game craze of the 90s Flying Buffalo released booster packs containing eight randomly assorted cards including the very deadly 200-megaton warhead.  The third expansion Weapons of Mass Destruction expands upon the game with more secrets and warheads.

I have been playing Nuclear War and its associated companion games since 1988. During that time I have come up with many different playing strategies, most of which failed. My current playing strategy is simple and I will get to that later.

Why a player guide? There is three Nuclear War sites on the WWW, none of which give advice on how to play the game. Hence, I thought I would impart my words of wisdom.

The guide covers all the sets coupled into one supergame.  If you do not have all the sets together, don’t worry this is a general guide at best and it will still help you.

Part one: the basics:

Read and re-read the rules. Simple? I learnt Nuclear War from someone, it was not until I bought my own sets and read the rules properly did I realise they had been doing things wrong. I have since taught my friends to play and passed on my expanded knowledge to them. So, you do not own the sets? Flying Buffalo will sell you the rules for $3 and I suggest you check out their website for further information.

A brief word on population.

This is your playing token, while you have people you are still in the game. See “Population Preservation” below for more advice.

When you collect your initial hand, whether it is through the standard nine-card deal or picking two and then discarding, the opening hand is important. If you only play the standard method, save yourself some time and then skip on to the next step. The booster packs introduced the variant method for dealing.

What to keep and discard.

I generally only keep two propaganda cards as thermonuclear war starts by turn three; after that, propaganda becomes useless.
Warheads are always worth keeping and the same goes for missiles. When retaining missiles, the Saturn is by far the best, not only has it the biggest carrying capacity, it is hard to shoot down, and second best is the MX.
Most special cards are worth hanging onto, with a particular preference to the anti-missiles.
Now you have your nine cards. Place two face down cards and then place a missile for the third. My reason is simple, the cold war strategy in the rules may work, but I have never seen it, I think this may be down to the weighting of the game to missiles and warheads.

If someone has already stolen some of your population, target them with the propaganda and if not then target someone who already has. Once you have a target, do not stop attacking them, the only time you ignore this rule is when multiple people are attacking one person, then you target them!

By starting war quickly, you minimise the amount of your people you can lose. Propaganda always hits and denies your final retaliatory strike! Where possible cancel or redirect propaganda cards because once at war this stratagem does not work. When at war, change your large denomination cards as quickly as possible as this denies your opponent the chance of stealing a 25 million population card with exchange students. The flip side to this strategy is the card that enables you to double a single population card.

There are not many of these in the game and they will get you maybe a one-turn reprieve, but used properly people will I hope fear you. Once you intercept an attack, you draw an immediate replacement and you go again, this gives you enough time to deliver a surprise punch even if someone decoys or jams the anti-missile, it does not matter you go next.

Part Four: The Correct Use Of:

Supervirus:
OK, so you pick the Supervirus card up from the stack or you stole it using a spy. Which player is the best to give it too? In my experience, give it to the player on your left, this way the virus will run uncontrolled on the beginning of each player’s turn, causing its lethal damage. Now you have given it to that player they cannot give it back to you without holding it for another turn and losing an additional 1-6 million people! Congratulations, you have caused 2-12 million deaths this way to this one player.

Bombers:
If you have a bomber, do not play it straight away, wait a turn or so to see if you can pick up any worthwhile warheads for it. Bombers are also worth keeping for final retaliation, as you can drop up to 100 megatons in one bombardment to your opponent. If you have the Delta Clipper, then I recommend dropping as much from it as possible before final retaliation, because you cannot drop more than 75 megatons from it.

Submarines:
This launch system is the most complicated to use correctly.
Firstly, when you turn this card face up, place it facedown and at sea, then write down on paper which country coastline it is sitting around. You write the country down rather than the player since there is a country that enables you to swap countries around. Now from your hand, place up to 20 megatons facedown beneath it. If you have UFO technology, you can place up to a 40-megaton warhead beneath it, since the submarine is not a bomber.

No trick to this one, just make sure that if you wish to use the cannon, the preceding card is not a missile, the only exception to this rule is the MX missile.

Cruise Missile:
If this in your opening hand, this becomes your number one card. This self-contained missile and warhead war starts when launched! This will protect you for a couple of turns while everyone’s propaganda cards become useless.

I would not recommend loading this up to its full capacity, this delivery system is worth keeping loaded for final retaliation; then you can drop everything in one go rather than one warhead per turn.  It is now one of the only ways of dropping the 200 megaton warhead.

Can be used as a bomber but I find it is best off to resupply the Space Platform.

Probably the best delivery system in the game and it was only available in the booster packs.  It may not be able to carry as many megatons  as some of the other bombers but you can discard other cards from your hands to reuse it.

While useful for seeing what’s in your opponents hand I tend to use them to steal secrets or foil the Saboteur.

There is only one of these in the game and its only worth deploying if you have no usable warheads to pair with the bomber or use it as a discard with the Delta Clipper.

This special card can enable any missile to carry any warhead, even the fearsome 200-megaton device.  I feel that the best use for this card is on the Saturn as it is very tricky to shoot down and should have a greater chance of destroying all life on the planet.

So you are out of the game, time to pick your targets and blow them to hell.
Match up each acceptable warhead and bomber combination, then discard the rest.
If you have a 100-megaton warhead, try to detonate it in your own country to blow up the universe, then nobody wins and the result is a stalemate. It has happened and I did once after being the first person killed.

I trust you find this player’s guide useful, if you have any questions, then please contact me and I will do my best to answer questions based on my years of play.