Gaming with an iPad

Way back in April I mentioned about using my iPad as my Game Masters Binder, since I wrote that post I’ve had more of a chance to explore the capability of the tablet and explored some of the apps available for it.

When it comes to reading pdfs I use Goodreader as it is a reasonably priced app and handles most documents I have thrown at it with one or two hiccups along the way; although to be fair this was mainly down to the way the iPad handled the image format embedded in the file rather than the file.

Trunk Notes is another useful tool as it is a personal Wiki notebook and it has a bit of a learning curve you can do some pretty amazing things with it.

Hero Lab started off as an interactive character sheet viewer for their desktop application but with a license the latest version enables you to create Pathfinder characters right there on the tablet and performs all the hard work for you.  Since the team give you two licences when you register the package it is even more of a bonus.

The iPad doesn’t support multi-tasking so when I have to change apps there is a delay while you do so, so I may have to compile all the encounters notes into a separate document and use the iPad for other tasks; like keeping track of initiative.

The price of the iPad was quite a bit when I got it and so I only have one, which can be a pain in the neck when you have various books only as a pdf and the players want to consult them.

Having a tablet has helped things a lot, there was one more item for inclusion but that deserves its own separate post on the blog. 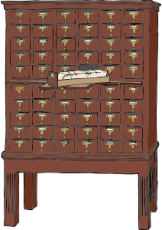 I think I’m on the verge of a breakthrough.

This morning I was relaxing in my bath, when I had that Eureka!  moment.  What if it was possible to scan a directory of pdf files looking for the word ISBN and then extract the 13 character string that followed it?  I could then export all the results to a file and import it into my Collectorz database.

I guess the next step is to try and find out how to accomplish this task.

Do you use pdf bookmarks?

Over the years I’ve purchased several pdf files of gaming books and I continue to do so as I find it a convenient way to carry my gaming collection on the go.  Before my tablet I preferred to game at my house as it saved lugging several kilogrammes of gaming books to and fro.

The technology to create these files has also improved and the tools that game authors have are vastly superior to what they had to use before. Despite all these advances there is one area that a lot of these books fall behind with and that is a nicely indexed and bookmarked document that will allow you to jump to the relevant section of a book in a heartbeat.

I know the pain involved with creating a table of contents in Word and there are ways of doing it automatically, is this the reason why publishers steer clear of including a basic bookmark structure, for the fact it looks unprofessional?

I feel not having something like this only adds to the amateur quality of a product.

I wonder if I start leaving comments on the products I bought saying “yes, I like it but why isn’t this pdf bookmarked?” would this start a revolution in the industry?